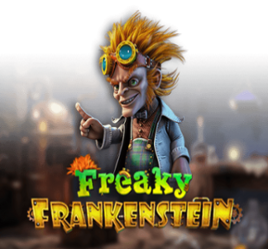 Freaky Frankenstein is a unique online slot machine first released by Nucleus Gaming in 2017 and re-released in 2019 with even better graphics and sound effects. Because Nucleus is a well-known software developer that produces and provides only excellent quality products, this game will definitely not disappoint its players.

The game was created based on the famous book by Mary Shelley, “Frankenstein” written in 1818. The game takes place in Dr. Frankenstein’s scientific underground laboratory. This brilliant and mad scientist is on a mission to revive a dead body with an electrical discharge produced by lightning.

The game user will find the game symbols, including strange whirring machines, two cartoon heroes, the Doctor, and his horrible creature in the mad scientist’s underground lab.

This 3D video game possesses three rows, five reels, and twenty paylines plus an incredible 96.83% certified RTP. The game is approachable to play in the free demo mode without risking the player’s deposit money, just relaxing and having fun and pleasure. Nevertheless, those who do not mind winning real money in the online casino can also play it in the base mode.

The smallest bet is 0,4 coins, and the biggest one reaches 100 coins. The biggest winning is 100,000 coins which can be cashed out provided the special casino requirements are met.

Freaky Frankenstein slot was produced based on FLASH, JS, and HTML5. The slot machine is acceptable to play on the desktop of the computer or in a mobile version on Androids and iOS mobiles.

The player-friendly bonus system of the slot gives the player various bonuses, for example, Free Spins, the Bonus Game, the Wild, Scatters, Bonus Symbols, and the Gamble Game.

The machine with a light bulb is a scatter. The player obtains eight free spins if it drops anywhere on the reels. And each of the eight spins supply the player with one to three wilds.

The bonus symbol in the slot is the Lever device which may land only on the first, the second, and the fifth reels. The most valuable bonus symbol is Frankenstein. If it lands on the reels, it may bring the player 100,000 winning coins.

If three bonus symbols appear at once, they activate the Bonus Game.

The Wild can substitute any symbols except bonus symbols. And it outcomes 5,000 coins.

It is also often called Risk or Double Game. This bonus activates after the player hits a winning spin and allows to double the reward.

The Reasons Why This Slot Is Worth Playing

Considering that the game was developed by one of the leading developers with an excellent reputation in its field, there is no doubt that those who will choose this slot for entertainment in their free time will get the highest quality online game.

And the Freaky Frankenstein’s gorgeous 3D animation and bright graphics will immediately immerse the user in the strange world of science and animated monsters.

In addition, the impressive set of various bonuses will not let anyone be disappointed.

Is the Freaky Frankenstein available for free?

Yes, you can play it in the free demo mode.

Can I play Freaky Frankenstein on my mobile phone?

Yes, if you have an Android or iOS mobile.

Are there free spins in the Freaky Frankenstein slot game?

Yes, if the device with a light bulb drops on your reels, the free spins bonus will be activated.