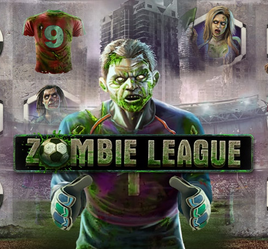 Apocalypse Now: Start the Game with the Undead at Zombie League

Woohoo Games have made it perfectly clear: zombies and football are indeed a nice match. With Zombie League, a slot with a horrifying background and a potential jackpot of 5000x, you will be invited to explore the world of cascading reels and expanding wilds. Zombie League is also known for its generous treats that include free spins and bonuses.

The horror game is sure to tickle your nerves now that even zombies seem to be into football. They have formed a team to compete against the players, and the 3D layout of the game with its transparent reels will be another colorful addition to your collection. With the stadium seen in the background, the players will be able to feel the atmosphere of the game, which has been packed with extra features for more fun.

Zombie League has 5 reels and 243 ways to win. An autoplay option is available to players who have decided to mix horror and athletics. Moreover, the game has multiplier options and playing card symbols that can be found on the football jerseys as you start the session. Zombie League becomes home for a few undead players, a referee that has risen from the dead, and a zombie fan.

With its tumbling reels and consecutive wins, you can be sure that the winning symbols will be replaced with the new icons. To get rid of the standard symbols, the players need to find the wild symbol, which has been disguised as a football ball. In order to trigger the free spins round, 3 or more trophies should land on the reels. Trophies are scatters, and the wilds appear on the reels to help you win the free spins.

Beating the Undead. How to Spin the Reels to Get More Wins

In Zombie League, the zombie players are established as the symbols with the highest value. Their spotted and smeared jerseys come next. The players are allowed to try the demo version of the game before they start gambling for cash at the top casinos online.

Bets that can be made throughout the game range from 0.50 to 100.00 credits. You will play on the grid of 5×3, with the maximum win being 5000x your bet. The volatility of the game is not that high, but it is worth taking a risk if you are a small stakes player. There are two main features that deserve your attention in Zombie League:

Can I win real money at Zombie League?

Yes, it is possible to win real cash while playing the Zombie League online slot, with the biggest prize in the game being 5000x your bet.

What is the RTP of the Zombie League online slot?

The general payout rate of the Zombie League online slot is 96.48%.

Is the Zombie League slot compatible with mobile phones?

The Zombie League slot was designed with HTML5 coding, which means that the game is available on your desktop, tablet, and mobile phone.

Why should I play Zombie League?

Zombie League is one of the most innovative games that you will find. It combines the element of fear and football traditions to surprise you with cascading reels, free spins, and generous payouts.