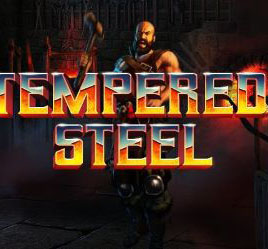 Tempered Steel is a video slot with a 5×3 playing grid, 20 paylines, and an RTP of 96%. The game includes several uncommon bonus features.

The game has a dark theme that brings a mystical feeling. Two chains are hanging on both sides of the reels with one of them having a hook hanging above a burning oven. The reels are framed by shiny steel.

The low-value icons are represented by playing card suits made in semi-melted steel. The high-value symbols are different kinds of weapons. The wild symbol features a blacksmith with a hammer, and the scatter has a “Bonus” word made of melted steel on it.

The wild icon replaces all the regular symbols and can appear as stacked. At least three scatter icons on the reels trigger free spins.

During the free spins round, stacked wild icons appear, climbing on the reels. They may take between three and five positions depending on how many bonus scatter symbols activated the feature.

Each reel can provide one climbing stacked wild, moving one reel up on every spin. This continues until all the fires are turned out. The round can be randomly re-triggered. The re-triggering also expands the wilds stacked on reels 3 and 4 with an extra position.

The Forge Your Weapon feature is triggered randomly and allows the gambler to select one of the three hidden weapon icons on the screen. Several icons of the chosen weapon are then added to the reels.

The Bonus Frenzy feature is also triggered randomly and adds extra bonus scatters to the reels.

The player can also use a Bonus Buy feature and purchase three or more bonus scatter icons for 100x his stake.

What is the RTP of the Tempered Steel slot?

This game’s RTP is 96%, and volatility is high.

What is the maximum prize in the Tempered Steel slot?

Are there any free spins in the Tempered Steel slot?

Yes, this online slot comes with the free spins feature. You can trigger it by landing three or more scatter icons.

Can I play the Tempered Steel slot for free?

Sure, this game is available in the demo mode without the need to register for an account and make a deposit.