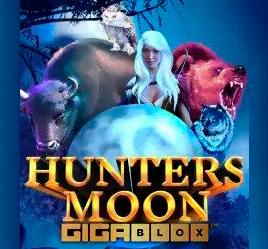 Hunters Moon Gigablox is an online slot released by Bulletproof Gaming. The game has 50 fixed paylines and an RTP of 95%. Bonus features are pretty unusual and, among regular free spins, include Gigablox and the bonus reel.

The slot’s theme is rather difficult to pin down. The background features a blonde girl carrying a sword and bow and wandering a forest surrounded by wild animals.

The regular icons include fluorescent playing card suits, buffalo, wolves, owls, and bears. The higher-paying icons award wins between 4x and 8x the bet for landing five-of-a-kind. The wild symbol is represented by the Hunter. It provides a payout worth up to 8x the stake.

The wild icon appears on the reels to replace any other symbol and create winning combinations.

Gigablox are oversized icons appearing on any spin and expanding to symbol sizes of 2×2, 3×3, 4×4, 5×5, or 6×6. Any icon can appear as Gigablox, including wilds and bonus icons. Each Gigablox is split into 1×1 icons when landing in a winning combination to calculate payouts or free spins.

Atop the play area is a bonus reel moving to the left. It slides in wilds and/or bonus symbols. If the bonus reel slides in the wild or a bonus icon, or both, these transform regular icons beneath into the same.

For triggering free spins, the gambler requires five or more wilds or bonus symbols. Each bonus icon transferred to the reels provides an extra spin.

There is also a Bonus Buy feature allowing the player to purchase free spins for 100x his stake.

What is the RTP of the Hunters Moon Gigablox slot?

Can I trigger free spins in the Hunters Moon Gigablox slot?

Yes, you can. This video slot has a free spins feature triggered by landing five or more bonus icons. Besides, you can buy free spins with the Bonus Buy feature.

Is the Hunters Moon Gigablox slot available in the free mode?

Sure, you can play this game for fun as long as you want. The demo version allows you to play the Hunters Moon Gigablox slot without registration and deposit.

Can I play the Hunters Moon Gigablox slot without downloading anything?

Yes, you can load this game in the browser on your mobile or desktop device.