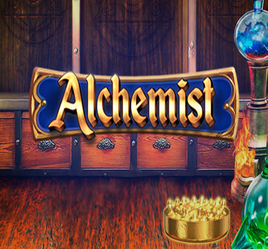 Find Out Where and How to Play Alchemist Slot

Humankind has long raved about alchemy to get gold and other precious metals right from the air. Octavian Gaming understands that, and this developer decided to create a slot called Alchemist. Thanks to this game, every lucky player can feel like an alchemist and hit a massive jackpot without making any special effort.

All buttons are made in the shape of large flasks and retorts. In the lower right corner, users can see a Spin button used to start the reels. Add Line is responsible for setting the number of active lines, Bet Line – betting, Bet Max – setting the maximum bet, Gamble – start the double game.

The game’s main theme is, as the name suggests, alchemy and magic, which is perfectly reflected in the visual design of Alchemist. There are symbols on the reels depicting a bowl, a drawing, flasks, a book with spells, gold coins, beakers, crystals, and a turban. The music and sound effects perfectly complement the atmosphere of the game.

Before starting the game, look at the payout table: it shows all the prize combinations paid by the machine. The smallest rewards come from combinations of card symbols (up to 200 credits). For five flasks with bubbling green liquid, the slot pays 1,000 credits. Much more substantial payments guarantee combinations of five Alchemists or Dragons.

Even the most generous winnings can be multiplied. It is enough to run the risk game by pressing the “Gamble” button. The screen will be a series of flashing stripes. The player’s task is to re-press the “Gamble” button at the right time. If a player gets lucky, the prize will double; in case they are unlucky, the whole amount is “burned.” The good idea is to start the machine The Alchemist to play for free and without registration.

The most important role in the whole process plays the Book: a huge folio decorated with a glittering emerald that serves as the scatter symbol is also considered the wild symbol. If a prize combination is missing one image, the Book will successfully replace it. If the screen simultaneously displays more than two Books, the bonus game will start. The more scatters – the more free spins will give a bonus round. For three Books, it is entitled to ten spins, four or five – 12 or 15 spins, respectively.

The main bonus involves an original level with two attempts available. One more bonus is free spins (FS). To enable this special reward, at least three symbols should show up on the reels. It is possible to obtain ten extra spins. All wins are multiplied by two during the FS.

Special game symbols help to win more. For example, Wild can replace any icon that isn’t enough to get a prize combination. Scatter, if it meets three or more times on the playing field, triggers fifteen FS. It often happens that during these spins, the scatter again falls in the amount needed for another fifteen spins. They will be added to the remaining spins.

How large is RTP at Alchemist Slot?

The return-to-player in this pokie equals 94.43 percent.

How many paylines and reels does Alchemist have?

In this game, 25 paylines are included. As for the reels, there are five of them in this slot.

How high is the volatility in Alchemist?

The volatility in this slot machine is medium.

Is it possible to play Alchemist Slot on different devices?

This machine is compatible with a great variety of devices. Should it be Android, Windows, Linux, or iOS – enjoy this slot everywhere.