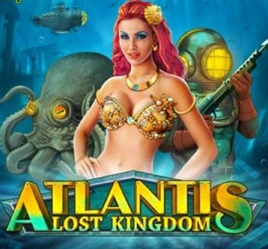 Atlantis Slot: Is This Online Casino Game Worth Trying?

Atlantis is a slot with a volatile aquatic world by Octavian Gaming, and the main plot’s game is played on 5×3 reels with twenty pay lines. This time, the software developer will take the players to the sunken city of Atlantis, where they have to follow male and female explorers searching for a hidden key that opens a portal that teleports them back to the golden days of the legendary city. The characters here remind users of the incredible underwater empire.

Playing Atlantis in a Free Mode

Demo mode is available for all gamblers. Thus, it is not necessary to deposit money in order to play and win some real cash. Those who are new to the business will benefit from testing this pokie. Before locating real money wagers, it is a good idea to learn how to play the game with no risks. In a free version, players can turn the reels as many times as they want without investing or risking a cent. In this case, however, users will get virtual money only. To start gaining real cash, they should deposit the minimum required amount and play in a corresponding mode.

The premium symbols pay between 20 and 125 times a player’s bet for five wins of the same type, and the wild symbol replaces all of the regular payout symbols to help complete winning combinations. It cannot replace only some rare characters. Gamblers can turn the Super Stake ante feature on/off between spins of the main game, and turning it on doubles the regular stake along with the chances for the bonus round (mini-game that offers unique prizes and increases chances of winning).

The wild symbol doubles as a scatter symbol, and a player needs at least three of these special characters to trigger the bonus round. A gambler will win ten free spins (FS), no matter how many scatters they obtain above three wilds. In addition, the player will also get scatter wins of two, twenty, or 200 times the initial bet when a player gets three, four, or five scatter symbols, respectively.

Players can see a few small wins in the main game before buying the bonus round at about 1:20 in a three-minute highlights video. The giant symbol feature was triggered several times, bringing in decent payouts, and gamblers can see it all by clicking the play button.

Where is it possible to play the Atlantis slot?

Betsson Casino, Kosmonaut, Bet365, 888 Casino, 1Win, and many other online casinos have this title in their game libraries.

Is the specific device compatible with Atlantis?

As far as this video slot was designed with the help of HTML5 tech, users can enjoy this pokie on their mobile phones, tablets, and desktop computers. The website version is properly optimized.

What are the primary themes of Atlantis Slot?

The available themes involve Fairy Tales, Folklore, Tribes and Lost Civilizations, and Under the Sea.

How large is the RTP in Atlantis Slot?

Currently, the return-to-player in this slot machine equals 94.15 percent.

How many paylines and reels are there in Atlantis?

What is the largest coin size?