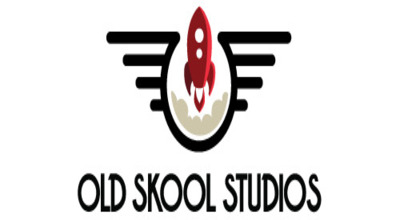 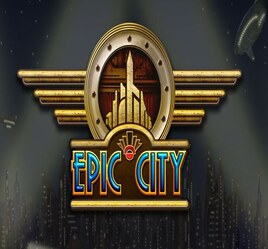 Epic City is an Old Skool Studios release that is themed around glamor and the golden age of the 30s. This game takes the gambler to a city of tomorrow, showing how people imagined cities would look like in the future when it was the 1930s. The game features 5 reels and 20 paylines.

The game has a unique theme, showing what people imagined the world would look like in the future when it was the 1930s. The background includes a skyline of gold and bronze skyscrapers, zeppelins, statues, and airships flying across the sky. The game starts with a lightning storm. The player has to bring the power back on in the city. The video slot begins with a 1930s music soundtrack and a short explanation about the game set.

The icons are set at different levels. The lower-paying ones are represented by playing card suits (hearts, clubs, spades, and diamonds), designed as jewels. The higher-paying icons are created in a  gold shield style and include such symbols as a zeppelin, a train, a sports car, and a cruise ship.

The game’s wild symbol can substitute for all the regular icons and help create new or better winning combinations.

The slot’s scatter icon is depicted by the bonus skyscraper. Once the player lands three scatter symbols on reels 1, 3, and 5, the Power Bonus feature gets triggered. This game features five levels, each completed by the player turning on the part of the city’s power. Several bonuses may appear during this feature: Win-All provides the gambler with all the level’s prizes, Advance takes the player to the next level, and Collect provides a cash prize and returns a gambler to the main game.

Once three or more Free Games icons land on the reels, the free spins feature gets activated. Three scatters award the player with 8 free spins, four provide 12 free spins, and five bring the player 20 free spins. Besides, this round comes with a multiplier. The player gets a turn on the Multiplier Wheel and sees how much his prizes in the free spins round will be multiplied by.

What is the RTP and volatility of the Epic City slot?

What bonus features does the Epic City slot include?

The game has a wild icon that replaces other symbols, a scatter symbol that triggers the Power Bonus feature, and free spins feature.

Can I play the Epic City slot on my tablet?

Yes, this game is compatible with mobile devices so that you can play it on your smartphone or tablet, even on the go.

Is the Epic City slot available in the free mode?

Yes, you can play this game online for free for as long as you want. However, keep in mind that you cannot win real cash unless you make a deposit and switch to the real money version.