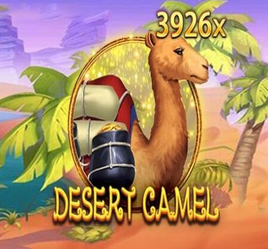 Desert Camel is an online slot from Iconic Gaming with an Arabic desert theme. The game features a 5×3 playing grid with 25 fixed paylines. The features include free spins, wild symbols, and multipliers.

Desert Camel has a random bonus Sandstorm feature triggered by a non-winning spin. During the feature, a sandstorm whips across the board, triggering a re-spin with a 2x multiplier.

If three scatter icons land anywhere on the reels, a free spins round begins, providing a gambler with seven free spins, during which either of the wild icons may land on reel 5. With each following spin, the wild symbols move to the left. When the regular wild symbol cannot move left any further, it transforms into a special wild, and the player is awarded another free spin.

What is the RTP and variance of the Desert Camel slot?

The developer does not provide any information about the game’s RTP, but it seems fairly average compared to other slot machines. The game’s variance is medium.

Which bonus features does the Desert Camel slot have?

This slot has two wild symbols, a scatter triggering free spins, and a bonus feature with a 2x multiplier.

Can I play the Desert Camel slot without a deposit?

Sure, you can. Most online casinos allow their users to play online slots for free. Just select the demo mode and try this game without any deposit to see if you enjoy it.

Can I play the Desert Camel slot on my smartphone and tablet?

Yes, you can. This game is mobile-optimized, meaning players can enjoy it on iOS and Android mobile devices.