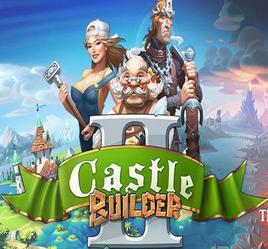 Castle Builder II by Rabcat is far from being an ordinary online slot. It combines beautiful 3D graphics, fantasy theme and unique playing options which can hardly be seen in many other online games. The kingdom in which the action takes place offers gamblers an opportunity to affect how big their payout will be depending on their choices and level. This means that the more one plays, the more cash one can get, and a reputable RTP of 96% makes it a highly rewarding experience.

Castle Builder II is a sequel of Castle Builder Slot. It is essentially the same, but it has some significant visual improvements and new features which make the game more interesting to play.

Castle Builder II is played on traditional five reels. The game has fifteen possible paylines and a great variety of contrasting locations. As the main topic is castle construction, the player’s duty is collecting resources, experience and gold in order to build different palaces. 15 kingdoms and 75 castles to build make the game truly fascinating, considering the fact that the buildings’ designs vary greatly from one level to another. Gamblers will have an opportunity to construct both medieval fortifications and state-of-the-art skyscrapers, so there is no way that one will not find a level which will perfectly suit their preferences.

Sound effects add to the atmosphere the game creates. Players can hear how the construction progresses, and every completed project increases the player’s level. With every promotion, the game becomes more and more rewarding, as the chances to win real cash increase.

How to Play Castle Builder II

When starting the game, one will have to choose one out of two available characters. As one increases their level, new characters get unblocked. All of them have unique skills and appearance which can be useful in different tactics of playing. The gameplay of this slot itself is pretty simple: it consists of a 5×3 grid and has 15 paylines. The players need no more than to choose their wager and spin the reels. The minimum and maximum betting levels are 0.15 and 30.00, relatively. What makes the slot a bit more difficult is the task of collecting resources. They are randomly landed on the grid and need to be added to the meter under it.

Bonus Features Not being a common online slot, Castle Builder II does not offer as many bonuses as some of the other games in the market do. There are some well-known features such as a Wild Symbol and a chance to win some free spins, but overall, the bonuses features is substituted by the promotions system.

How high is the RTP of Castle Builder II?

Castle Builder II has a reliable RTP of 96%, which is average for an online slot. The game’s volatility is rated as medium to high.

How many paylines does Castle Builder II have?

Castle Builder II has fifteen paylines. Although it is played on a rather classic 5×3 reels grid, it has many special features which make the game stand out among others.

How many levels are there in this slot?

In Castle Builder II, one has 75 castles to build, using different resources and strategies. With every passed stage, the player increases their game level and winning potential.

On how many reels is Castle Builder II played?

Castle Builder II is played on a classic 5×3 grid which is filled with special symbols in form of resources.

What are the minimum and the maximum wagers in this slot?