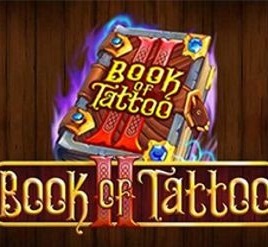 Book of Tattoo 2 – Sequel of a Popular Slot

Book of Tattoo 2 is the sequel of a popular tattoo-inspired machine by Fugaso. This new story was offered to the public in 2019, so players had to wait for three years to see the continuation of the Book of Tattoo slot.

While the gameplay and reel structure remains similar to that of the original, the design and the overall look are completely different. The studio added more color to symbols and the background. Thus, symbols look more modern and trendy.

The reviewed release was developed by Fugaso. This is a Cyprus-based software developer that has been in the world of gambling since 2016. It focuses on the creation of video slots and seems to appreciate “Book of…” games a lot. Its portfolio is available in more than 70 online casinos in different markets.

Being a slot inspired by the “Book of…” series, this title has five reels and three rows. Unlike, the original version with only 10 paylines, there are 243 ways that allow a player to create a winning combination of at least three identical icons. Despite the much bigger number of paylines, the sequel has a smaller maximum payout. It is only 200x the total bet. The RTP is 96.5% which is above industry standard.

The paytable is represented by 11 symbols, namely:

As well as in other “Book of…” releases, Fugaso has diversified the choice of bonuses in this game.

One of them is Mystery Respins. When mystery icons land on reels 1, 2, and 3, they can launch mystery respins during which all mystery symbols are locked in places. If new instances of such icons show up on the grid, an additional respin is granted.

Another feature is more traditional. This is a free spins round launched by three Scatters. During this bonus, all mystery symbols that show up on the grid will lock in their places. If the entire reel is covered with such icons, two extra rotations are rewarded.

What is the maximum win in Book of Tattoo 2?

Players can win up to 200x bet in this game.

Is variance high in Book of Tattoo 2?

Yes, variance is high in this slot, and the RTP is 96.5% which is quite high as well.

Are there free spins round in Book of Tattoo 2?

Book of Tattoo 2 offers free spins with sticky mystery symbols. Moreover, there are mystery respins in base mode.