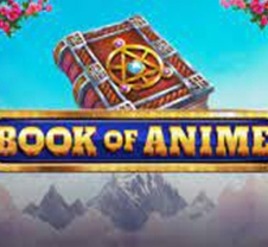 Book of Anime is an unusual release by Fugaso that was presented to the gaming community in September 2019. This game combines the “Book of…” mechanic with Japanese anime, and such a blend is not that common. So Fugaso, a Cyprus-based software developer with more than 30 video slots in the portfolio, managed to offer players a unique game variant devoted to this genre.

This is a game that usually has five reels and three rows. The key symbol in such a release is the book icon that is both the Wild and the Scatter. This icon launches free spins with a random expanding symbol as a Scatter.

The main features of games in this series are also available in the Book of Anime. The uniqueness to this slot is added by an anime theme that is not that frequently used in “Book of…” slots. Thus, players are immersed in an exciting adventure in which they are to fight with a terrifying dragon and find a mystic book together with three main characters.

The story unfolds on the grid with the configuration of 5×3. 10 paylines allow players to scoop wins of up to 5,000x the bet. Speaking of bets, one can place anywhere between 0.1 and 20 credits at stake per single spin. The variance is high here, and the RTP is more than satisfying (97%).

An interesting feature in Book of Anime is that winning combinations created with high-paying icons give payouts even when only two symbols are involved. They pay from 750 to 5,000 coins for the five-of-a-kind set. To get a payout with the help of different crystals, one needs to collect at least three instances of the same kind on a payline.

The choice of bonus round is quite limited here. There is only free spins feature triggered by three or more Scatters. A player gets 10 free rotations played with an Expanding Symbol. This symbol is selected randomly from all regular icons.

Is Book of Anime available on mobile?

Yes, this game is compatible with all portable devices, so it can be played on mobile phones at many online operators.

What is the maximum win in Book of Anime?

This slot by Fugaso offers players payouts of up to 5,000x the bet. The RTP is 97%, and variance is high, so one can likely get a big win.

How many free spins can be won in Book of Anime?

What are special symbols in Book of Anime?

There is only one special icon in this release. It is a book that is both Wild and Scatter.