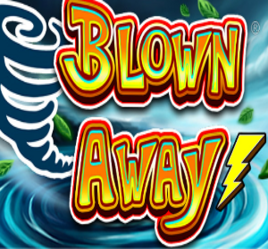 Blown Away Slot by Lightning Box: Enjoy It for Free

Blown Away is a fun-looking release from the Lightning Box slot developer. The slot features a new theme revolving around animal-based characters that become marooned on a tropical island after a storm at sea.

The game includes 5 reels, where each column has 3 symbols, and 25 active lines. The maximum win here is 900x the stake, and the RTP is 95.70%. Blown Away has various fun features, ranging from wilds and scatters to spins, re-spins, multipliers, and symbol removals.

The game’s theme is likely inspired by Robinson Crusoe stories. However, instead of having the usual humans as main characters, the slot features animals and birds, a different one in each symbol with a high value or feature. The low-value icons have images of Royals, but the higher-paying ones include seals, monkeys, penguins, seagulls, and lizards.

Unlike most slot machines, the sounds in Blown Away are not intrusive, with typical seaside background noises of waves and gulls. The mainstream music switches during different game sections, which is a refreshing change from the usual repetition.

Blown Away Betting and Prizes

The player can choose a wager for the upcoming spin, ranging from $0.25 to $200. The line bet ranges from $0.01 to $8 and is selected automatically, as the gambler modifies the total bet. The game features 25 active lines for each spin.

About 900x the stake is the highest win one can get here. It is a medium volatility slot with an RTP of 95.70%.

Most online slot machines feature a wild symbol, but few have two. Blown Away offers wild 1, a walrus that can substitute for any other icon aside from the scatter symbol, and wild 2, a tornado that can also replace any other icon but the scatter, and has an extra twist — the Tornado re-spin.

The Tornado re-spin feature is triggered when a Tornado wild appears on reel 5, awarding a gambler with a re-spin plus some onscreen action. Certain symbols are sucked off the screen by the powerful tornado whirl. During the first re-spin, all numbers 9s and 10s disappear, followed by all the Js, Qs, Ks, and As if further Tornado wilds come into play.

One more bonus is the Fabulous Free Spins game, and if a player manages to get that Tornado wild in play during free spins, the cows are being sucked up into the air. With any luck, it blows off the reels and boosts the player’s cow counting multiplier by x1. The player can get a possible seven cows, each worth one more re-spin.

Can I play Blown Away on my smartphone?

Yes! This game is based on HTML5 technology, making it mobile-friendly. You can enjoy this online slot both on desktop and mobile devices.

What is the biggest win I can get when playing Blown Away?

The maximum win offered by this game is 900x the stake.

Is it safe to play Blown Away?

Yes, this slot machine is a safe game to play. The only thing is to make sure you choose a licensed online casino to play, whether you like to play slot for free or for real money.

Do I need to register to play Blown Away?

What is the RTP of the Blown Away slot?

How volatile is Blown Away?

It is a medium volatility slot.