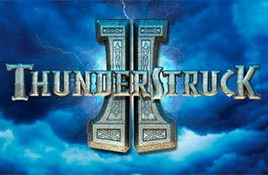 Thunderstruck II by Microgaming is an improved version of the original slot. It features five reels and 243 ways to win. Furthermore, it has four different, highly-rewarding bonus features that allow winning up to 2.4 million coins. The developer has the sounds and graphics right in this game, which is balanced out with dynamic gameplay and a high potential for huge wins.

Thunderstruck II features an epic soundtrack and graphics and animations of high definition. This slot machine focuses on Thor, the Norse God of Thunder. Various Nordic gods, including Loki, Valkyrie, Odin, and Thor are represented on the reels. Other symbols include Thor’s Hammer (Bonus symbol), the Thunderstruk II logo, the Ship, and Thor’s Home. There are also poker symbols (9 through Ace) available in this slot machine.

In this game, the Thunderstruck II Logo symbol is wild. It can substitute all other symbols except Thor’s hammer. Additionally, it can double the player’s wins when it substitutes in a winning combination. It ceases to be a wild symbol during the Wildstorm Feature that is randomly triggered and turns all the reels to wild. Free spins cannot be triggered during this feature.

The Great Hall of Spins feature helps the gambler to unlock the multi-level Free Spins bonus features. It is triggered when three or more Thor’s hammer symbols appear on the screen.

The Loki Bonus is triggered between the fifth and ninth bonus feature triggers. In this round, a gambler is awarded 15 free spins with a Wild Magic Feature that randomly turns symbols into additional wilds.

The last and most rewarding Free Spins feature is Thor’s Bonus feature that is triggered in the fifteenth trigger of the bonus feature. It awards the player with 25 free spins, and a Rolling Reels feature where consecutive wins increase the multiplier up to 5x.

What is the game's maximum win?

The most a gambler can win from a spin is 8,000x the total stake.

How volatile is Thunderstruck II?

Thunderstruck II is a slot machine with high volatility.

Does it have free spins?

Yes. The game comes with four free spins features which are chosen from The Great Hall of Spins feature.

Can I play this game for free?

Yes. It is available in the demo version.

Can I play Thunderstruck II for real cash?

Yes, you can. To do this, you should sign up for an account on a chosen online casino and make a deposit.

No, you can open it directly on the browser.