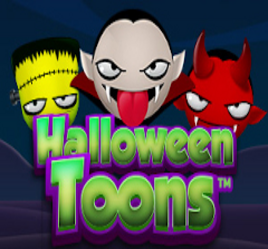 Halloween Toons is a Mobilots release featuring a 5×5 playing grid, an RTP of 94%, and low volatility. This is a cartoonish arcade with Halloween toons that are not actually frightening but rather cute. The game features wild symbols, a bonus round, and a player-specific jackpot.

Halloween Toons is not a slot machine in the usual sense. The reason is that, instead of having five reels with different horizontal paylines, it features a 5×5 grid upon which the icons appear in random combinations. Once four or more similar symbols appear on the screen, forming horizontal or vertical connections, the player gets a prize. It is possible for up to 14 matching icons to connect, providing a huge winning potential.

Many of the provider’s slots have a cartoon style, and Halloween Toons is not an exception. The game features a Halloween theme, but the reels feature not-so-scary tools that can remind the player of some Halloween happiness. These symbols include mummies, demons, witches, vampires, and Frankenstein depicted as cute little animations. Dracula is the highest-paying symbol here, providing a prize of 10,000x the bet if the gambler makes a cluster of 14 matching icons. The soundtrack of Halloween Toons is likely the scariest thing about the whole game, with the spooky music accompanied by coughs, laughs, and squelches.

Just like the majority of modern slots, Halloween Toons features a wild symbol that substitutes for all other icons appearing on the grid to create winning combinations or boost the player’s wins.

Besides, the game features a bonus symbol represented by Jack-o-lantern. When this icon appears on the reels, it starts to fill a special bonus bar in the top right corner of the screen. When the bar is full, the bonus game is triggered, providing a player with even more spooky entertainment and winning opportunities.

In addition to wild symbols and a bonus game, Halloween Toons also has a special jackpot icon, represented by Frankenstein’s monster. This symbol helps the gambler to accumulate a jackpot bar placed in the top left corner of the screen. As soon as this bar is full, the gambler is awarded a $50 jackpot prize.

What is the RTP and volatility of the Halloween Toons slot?

The game’s RTP is set at just 94%, which is significantly lower than the average slots’ RTP. The game has a low variance, meaning that lots of small wins can be potentially awarded to the player.

No, the game does not have free spins. Instead, you can take advantage of bonus symbols, a bonus game, and an in-game progressive jackpot.

Can I play Halloween Toons for free?

Yes, absolutely! You can try this game for free to see if you like it. However, note that this mode is intended just for fun, and you cannot win real money when playing in the demo mode.

Can I play the Halloween Toons slot on my smartphone?

Yes, you can. The game is fully mobile-optimized, meaning you can play it right through your browser on any mobile device.