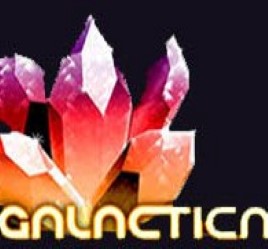 Galactica is a game developed by MGA that flawlessly combines an intriguing space plot with plenty of bonus games and beneficial features. The RTP of the slot is 96.6%.

It has a 3×4 layout, a single payline, and a variety of additional features, such as nudges, holds, vertical lines, free spins, and MGA’s characteristic upper game, which has its own paytable and eight paylines.

The existence of two-game reels is the most significant characteristic of this casino slot. This enables players to enter both regular and higher prize draws.

The Galactica game has elements of modern and classic casino video slots, having features similar to both. When the game loads, players can see galaxies in the background with deep colors and stars. Precious stones, as well as multi-colored 7s, are used as play symbols.

Users can spend hours immersed in the world of undiscovered space thanks to excellent sound effects and graphics.

Betting Options at the Galactica Slot

There is only one payline on the lower set of reels, which runs straight across the three rows of reels. Players can bet anywhere from 5 and 75 credits per spin, with the actual amount of money bet based on the casino’s setup.

Player also have the option of switching from the main game to an upper game. All they have to do is collect gems to unlock a new paytable with an increase from one to eight paylines.

A number of bonus games are also available, including:

Yes. Free spins are available in the first bonus game. They can be triggered by landing three crystals on the line.

Are there any extra features at Galactica?

How can I access the upper game in Galactica?

To enter the upper game, players need to win enough credits and gems. After this, the original screen will be automatically replaced with a more rewarding one.