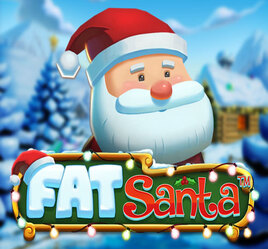 Fat Santa is a Christmas slot made by Push Gaming which is played on a 5-reel, 7-row grid. This is a sequel to Fat Rabbit developed by the same company, and it has some significant changes in comparison with the first game. Firstly, a „Feature Buy“ option has been included in this slot, which is the first time the developer has added such a function in one of their games. Secondly, players can also activate the free rounds instantly. Nevertheless, this feature also adds to the volatility of Fat Santa, although the company has rated it as medium volatile.

Fat Santa has outstanding graphics, although the visuals share much in common with the previous game of the series, Fat Rabbit. Instead of a green field, the background is filled with shiny snowflakes and festive presents buried in the ground. The player finds themselves in a log cabin with Christmas-themed bonuses such as Rudolph the deer, snowman and an elf named Bunny.

Santa himself is a cartoonish jolly man who perfectly fits into the overall vibe of the slot. The main goal of the main character is eating pies, thus gaining some holiday kilos and helping the players to get a bigger payout.

The Slot’s Interface and Gameplay

The game has 50 paylines, which adds to the winning potential and potentially makes the gaming experience more rewarding. The wager limits vary from 0.25 to 25 coins per spin, and this means that the slot is suitable for both low- and high-rollers.

Before spinning the reels, one needs to choose a bet, which is easy as the playing mechanics are intuitively understandable and quite easy to figure out.

The „Feature Buy“ option enables players to instantly trigger the free spins round for one payment of 80x one’s line bet. This might appear as a lot of money to spend on one bonus feature, but the chances it will pay out are also relatively high. Moreover, this feature is just perfect for impatient gamblers who do not like to wait until the right set of icons will land on the reels.

The game menu includes an instruction to the gameplay and autoplay option, with the help of which one can trigger up to 100 spins.

The first one of the unique bonus features the game has is Santa’s Sleigh. The sleigh can appear on the screen randomly during any round. Santa leaves a trail of mince pies behind himself as he rides across the grid, and these symbols then transform into wilds for the following spin.

The Free Spins feature is also quite uncommon in this slot. Whenever a wild Santa symbol lands on the reels simultaneously with a mince pie symbol, the player gets five free rounds which then can increase in number. During the free rounds, a tiny Santa lands in the center of the screen. As he eats pies, he increases in size and makes the multiplier higher.

What is the RTP of Fat Santa?

Fat Santa has a reputable RTP of 96.45%, which is slightly higher than the average rate.

Does Fat Santa have a Free Spins feature?

Yes, Fat Santa has free spins rounds. They are activated in a unique way which adds to the festive atmosphere of the slot.

What is the maximum payout one could get playing Fat Santa?

The maximum possible win is 1,000x stake. This is the most a player can get for a single win, but the maximum payout for the whole game is bigger.

How many paylines are there in Fat Santa?

Fat Santa has 50 paylines, which is a quite big number for an online slot. This potentially makes the game more rewarding and gives a plenty of opportunities for a big win.