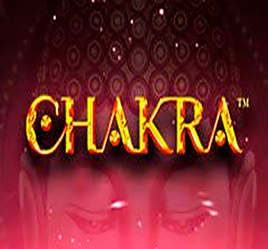 Chakra Slot is not just an online slot but a whole world of karma and Buddhism. It was developed by Espresso Games. At the very first spin, you plunge into the world of the Buddha, meditate with the monks, and cleanse your karma from negative energy. The slot has 5 reels, 3 rows, and 26 paylines. The RTP is above average and is 95.59%, which attracts players even more.

The minimum bet per spin is 0.26 euros, and the maximum is 260 euros. Thematic music relaxes so much that you just don’t oversleep the bonus options, which are not so few in the slot.

You are sure to be fascinated by Hieroglyph symbols. The variety of all possible bonus features include Wild, Multiplier, Sticky Wilds, Free Spins, Scatter symbols, Jackpot.

True to its name, this slot contains the symbols of the seven chakras and a couple of Hindu gods. The lowest paying symbol is the red root chakra. This is followed by orange, yellow, green, blue, indigo, and pink chakra symbols. Pink pays out 1000x your stake when you land five on a payline. However, the biggest win is the progressive jackpot. To win the entire jackpot, you need to land five Lakshmi symbols on a payline. Landing fewer coin symbols will still allow you to earn a portion of the prize pool.

There are also two special symbols in the game. The first of these is Ganesha, the god with the head of an elephant. Ganesha is a wild symbol that appears only on the second, third, and fourth reels. It can replace all standard chakra symbols. This game also has gold coins that activate the bonus. You need to put one coin in any position on the second, fourth and fifth reels. This will activate the chakra bonus described in the next section.

There are many special Chakra symbols, and they provide many pleasant surprises for lucky players. For example, the elephant symbol is the base game wild card. You can use it to replace the chakra symbols on the reels for more winning combinations.

The golden coin is the bonus symbol of the game. Collect 3 of them to trigger the 7 free spins bonus round, during which 2 special wild symbols also appear.

The 2 special wilds can be a little tricky to distinguish, so check out the game’s info page before you start playing. The Muladhara wild symbol substitutes for all symbols and sometimes doubles the value of combinations, while the Svadhisthana wild symbol can spread to entire reels and can triple the value of certain combinations.

If you want to relax a little but at the same time try your luck and win a little, you can safely launch the Chakra slot from Espresso Gaming. The slot has a unique ability to let go of all problems, and a lot of different bonus features will allow you to win well.

How to play online Chakra Slot?

First, you need to select the bet size using the arrows or in the settings. Then click “rotate” or select the auto-rotate function.

What is the maximum and minimum bet in Chakra Slot?

What is the RTP of the Chakra slot?

The return to the player of the Chakra slot is 95.59%. This means that you can get winning combos quite often, but they won’t be too big.

Is it possible to play Chakra Slot from mobile?

Now almost all slots can be played from mobile. Chakra also works on smartphones and tablets in the same way as on a computer or laptop.