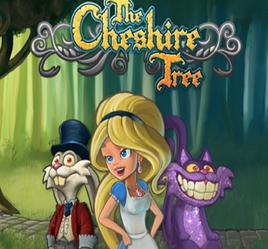 Amazing The Cheshire Tree is a popular online slot machine inspired by Lewis Carroll’s famous “Alice in Wonderland”. It was created by OMI Gaming, which is already a guarantee of the highest quality, and was released in 2018.

Outstanding graphics that consist of many easily recognizable cartoon images capture and take the player into the fascinating Wonderland from the very first minutes of the game.

It is a video slot with five reels. All the symbols in the slot are well-recognized characters from a well-known work, such as Alice herself, the Cheshire Cat, the Rabbit, The Hats, and the Tea Party. Plus, there are various potions and OMI coins.

The basic symbols of the slot consist of a clock and seven playing cards. The Rabbit is a scatter. Alice and the Purple Cat are wild symbols.

The slot machine delivers its players 15625 ways to win, although it may increase to 2,985,984! Moreover, the game is available in two modes. It can be played in the demo mode or for real money. And there are no fixed number of possible rows and no paylines.

To play the game in the demo mode, the player can use the arrows to choose their bet size or set the preferable bet in the settings. And for real money, anyone can play the slot in an online casino.

The gamer possesses the possibility to make a winning combination as soon as they land three to ten symbols on the serial reels. But there is a mandatory condition: the symbols must line up from the leftmost reel to the rightmost one and be identical.

Before the player launches the game, they need to decide if they want to choose the autoplay option or spin.

The game’s bonus system impresses. It allows the player to win up to 19,424x their bet!

There are stacked wilds in the slot game, like the Alice, which not only substitutes for other symbols to conclude the winning combo but this wild also activates up to twelve reel expansions. The Cheshire Cat replaces all symbols, but for Alice and the Rabbit.

And this is just the beginning of the impressive bonus list.

The Cheshire Tree free spins round, which can be set off in two different ways:

1) By landing the gigantic rabbit, the player obtains one fire hat, and, as soon as they obtain three hats, free spins get activated;

2) The player receives eight free spins by landing at least three giant rabbits. When the gamer lands the Cat while having free spins, the Cat turns into a sticky wild.

When landing the enormous Tea Party symbol, the player unlocks the Tea Party Wheel and gets the possibility to spin the bonus wheel, which, in turn, allows them to cash their prizes or have access to the free spins potion round.

At last, the gamer is able to unlock The Free Spins Potion trait if they land the giant position symbol. The Red Potion presents the player with more secured rows and the Line Burst. The Green Potion gives the player clustered wilds for better wins. And The Blue Potion directs to symbol splitters.

Another nice bonus feature of the slot is the bonus game. It is mandatory so that any player will get such a possibility.

Why Is This Slot Worth Playing?

It involuntarily recalls childhood and promises miracles. It is of the highest quality and fair, and legal. It is exciting and will undoubtedly distract from everyday worries, bringing bright impressions and unforgettable experiences.

Can I play this game for free?

Yes, if you choose to play it in the demo mode.

Is it possible to win real money playing this game?

Definitely, yes, but in this case, you will have to make a deposit and play in an online casino.

Can I cash out the winnings?

Yes, but you will need to meet some special requirements for this.